I learned a lot about leather needles when researching choices for a project. Having the right needle can make quality work easy and fun.

Leather needles are thin, clyndrical metal tools with one sharp point, and one eyelet, used to securely draw thread through holes in leather, utilized in hand and machine sewing. They are available in a range of thicknesses, lengths, with varying-shaped-points, and varying sizes eyelets. Leather needles cost generally a few dollars for a few needles.

There are many leather needle variations based on preference and the type of leather being sewn. Let’s explore to see what might be the most helpful option and which will be most handly to have around the shop.

What Is a Leather Needle?

Leather needles are 1-2” cylindrical metal objects having a diameter of .035-.063”.  Hand sewing needles have a hole formed at one end of the cylinder; called an eye, and typically a blunt end for pushing through pre-made hole of item being sewn.  Sewing machine needles are similarly shaped, except the point used to push through item being sewn is sharp and the eye is near the sharp tip.  The other end is designed to be fitted into the sewing machine. Thread is passed through the eye for stitching.

Glover needles are named thusly due to glove-makers use of them.  Glover needles are one of the few hand sewing needles that have a sharp point for penetrating leather as it is sewn.  They have triangular points on one end and an eye for thread on the other.  They are generally used for sewing hide and buckskin articles together. Useful for sewing suede or buckskin jackets, vests, or moccasins.

Lacing needles are used for lace, as opposed to thread, for items with pre-made holes in a leather article.  Lacing needles would be used for decorative work on belt edges, purses, holsters, or any number or items which may appear more rugged in nature.

There are two main types of lacing needles; 2-prong and Perma-Lok.  2-prong needles are made using two flat pieces of metal sandwiched together; one slightly longer.  One end is pointed, the other end, with one piece longer than the other, allows them to be separated so that lace can be placed between them.  A small tab formed into the non-pointed end of the needle is used to hold the lace in place.

Perma-Lok needles are cylindrical with a blunt, round, or chisel-tip end.  The other end is open and threaded where the lacing attaches, instead of an eye.  The lace runs parallel, or in line, with the needle and simply twists into the threaded end.

Cylindrical in shape with a blunt point on one end and eye for thread on the other, harness needles are the main needle type used when stitching leather using thread.  Sizes vary and are selected based on the eye size which determines the thickness of the thread which can be used.

Curved leather needles are similar to harness needles except they are not straight.  Sometimes they are semi-circle shaped or S-shaped.  Sizes vary to accommodate thread thickness.  Their primary use is sewing leather pieces that are on different planes.

Leather sewing awls are used to manually make holes in leather allowing needle and thread to pass through it.  Awls are advantageous for leather thicker than ¼” and curved or hard to reach areas that may be difficult to punch holes with stitching irons.

Leather needles are 1-2” cylindrical metal objects having a diameter of .035-.063″ with a triangular point for piercing heavy materials.

Machine needles have a special shank that allows it to seat in a sewing machine.  There are a two main shank styles, flat and round.  Depending on the model of sewing machine one has will determine the shank style.

All machine needles have a sharp point to penetrate leather.  Pre-made holes are not necessary as the needle perforates as it sews.  The style of point will be determined by the type of material as well as the finished appearance of the stitching.

Diamond point needles are used for heavy, dry leather and will actually cut through the leather instead of separating the fibers.  This is helpful for thicker leathers.

Round point needles have a conical sharp point that pierces the leather, leaving a round hole for the thread to pass through.

Twist point needles incise the leather diagonal to the stitching line.  It allows for uniformity, especially in footwear, as well as a very finished look.

Cutting point is a category of cross, wedge, twist, diamond, cross point, and triangular points.  Some are used for 2-needle stitching, while others provide a decorative finish.

Here is a helpful video on selecting the proper needle size for the leather being sewn, and the the tize of the thread being used:

Most needles are plated to prevent rusting.  Prior to use, inspect the needle for any damage to the point or burrs / damage to the eye, which can cause thread breakage.  Wipe down with a dry cloth or paper towel to ensure no debris or contaminants are on needle.

Needles can be stored in most any manner.  One could make a case from scrap leather, use a pin cushion, magnet, or simply a nook on one’s work surface.  There is no special way to store one’s needles, other than keeping them clean and free of damage.

Choosing the right needle can make sewing leather easy and enjoyable. With all of the various options available, it’s a fun category of tools to learn about, get experience with, and add to the shop 🙂 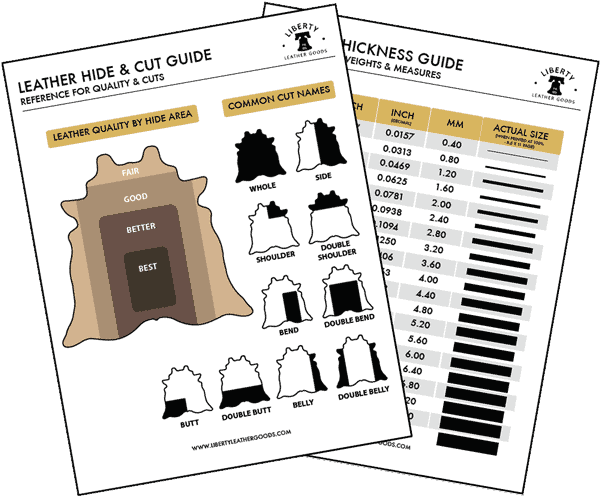