When working with leather, I like to keep the sharpest blade possible. However, a dulling blade is inevitable, so I strop my knives on leather to polish my blades and give them a longer lifespan.

Stropping a knife is the finishing process of removing extremely fine inconsistencies along the blade’s edge. This can be done with leather, denim, canvas, or other soft materials. Jewelers rouge or other polishing compounds are used to help finish the blade, producing a razor-sharp, polished edge.

Keeping your knife as sharp as possible makes cuts and skives effortless. Let’s look at the process and technique of stropping a knife and how it benefits any workshop.

What Is Stropping a Knife

Stropping a knife is a process of removing remaining inconsistencies after deburring a knife. Stropping is running a knife’s edge along a soft surface embedded with a polishing compound. Stropping can also hone a sharp knife that is beginning to dull. This can extend the edge’s life and prevent the need for frequent sharpening.

Uses for Stropping a Knife

There are two main uses for stropping a knife. The first is to polish and remove any blade inconsistencies during the sharpening process’s final stages. Alternatively, stropping a knife can be used for everyday maintenance or to extend the lifespan of an edge. Stropping consistently will limit the amount of wear and hone a blade’s edge.

Types or Variations of Stropping a Knife

While stropping is fairly simple, there are various techniques for different preferences. Firstly, the stropping surface is most commonly leather, but canvas, denim, softwoods, and other smooth surfaces can be used to strop. Second, polishing compounds are also offered in a wide variety of grits and textures. 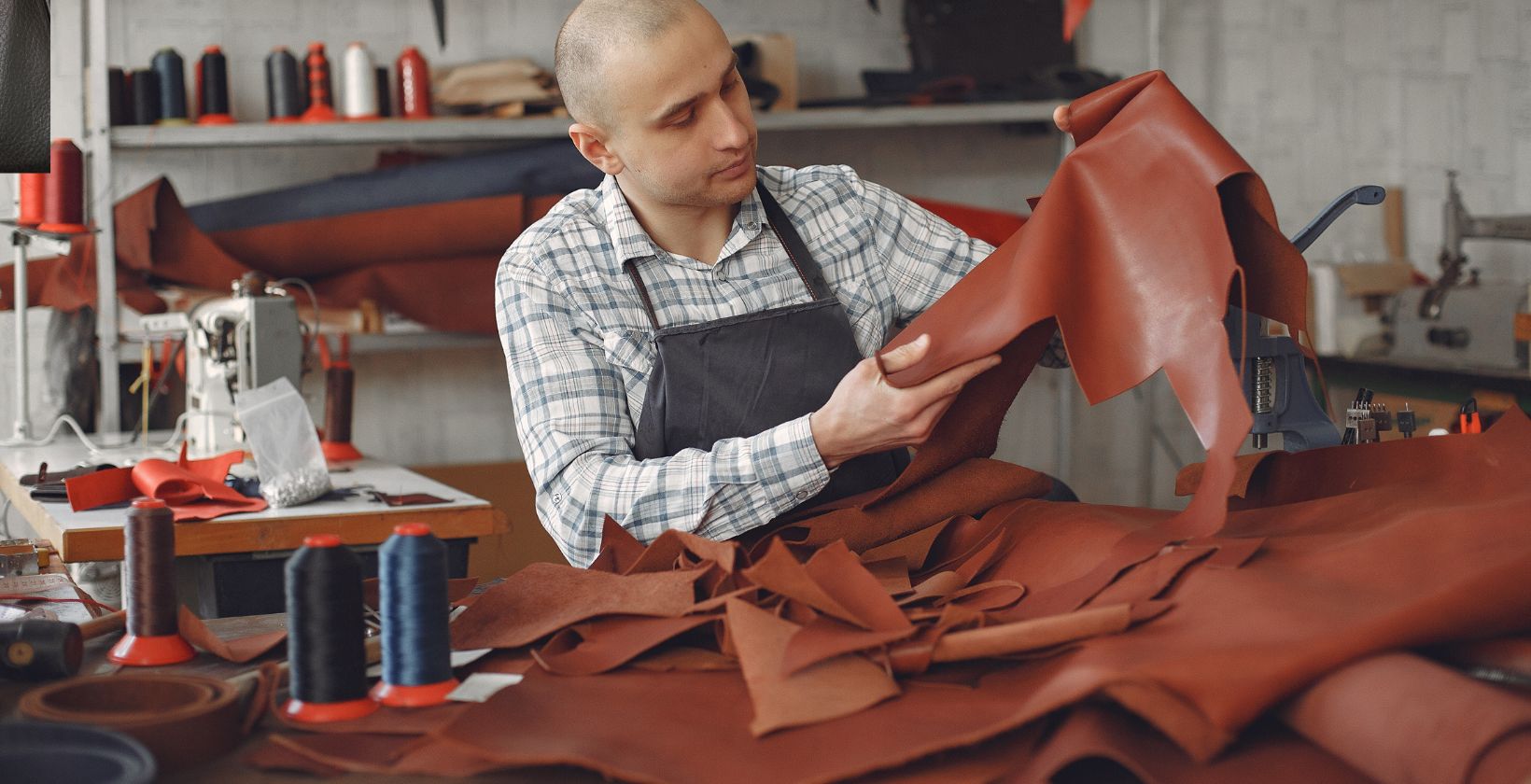 
The crescent technique is performed by sharpening the full edge at once, from tip to heel. As the name suggests, the tip is placed on the strop, and the blade is moved along using a single crescent motion.

Tools Needed for Stropping a Knife

Few tools are required for stropping a knife. One could use their jeans, canvas, or other materials found around a household. Paul Kirtley, a professional wilderness bushcraft instructor, teaches how to use a leather belt as a strop without any additional tools.

That being said, to further refine, an edge leather and a polishing compound will vastly improve the results from stropping. A variety of polishing compounds available will offer different levels of polish. Allowing for an even more complete edge polishing system.

Skill Level of Stropping a Knife

Learning how to strop a knife properly can be achieved in minutes. Blade angle, pressure, and direction to strop are required. The proper blade angle can be achieved through angle guides or by laying the blade flat on its side and slowly angling it until the edge is flush.

Little to no pressure is needed for stropping. The weight of a blade alone is typically enough. Lastly, the direction to strop in is always away from the surface. Pushing towards the surface could damage the strop or blade edge.

Few tools are required for stropping a knife. One could use their jeans, canvas, or other materials found around a household.

How to Strop a Knife

Stropping a knife begins with a flat surface with your strop material of choice. For this example, I will describe the process with a leather strop. However, canvas, denim, and even softwoods can be used with the same methods. After being placed on the surface, a polishing compound is added. Jewelers rouge and similar polishing compounds will be generously rubbed into the leather surface.

The knife to be stropped is placed at its sharpening angle. Angle guides can be helpful for achieving consistent results. However, without a guide, the angle can be found by laying the knife on its side and slowly increasing the angle until the edge is flush with the strop. The knife will then be run along the polishing compound at that angle while using little to no pressure.

It is important to keep the angle consistent along each pass and for the knife’s edge never to be pushed into the strop. For example, if the blade edge is facing you, the knife would be pulled away. Complete an even number of passes on both sides until the desired result is achieved.

Tristan Jubb from the Livestock Health Systems Australia details the effects of stropping. Closely inspecting the burr and how stropping tightens, straightens, and shortens it.

Stropping a knife can be used for everyday maintenance or to extend the lifespan of an edge.

Tips for How to Strop a Knife

How to Get Better at Stropping a Knife

When trying to improve at stropping a knife, the key is finding and maintaining a consistent angle throughout each pass. A marker can indicate the blade’s edge before making passes to help find the angle.

As the knife is run through the strop, the marker will be removed from the blade areas that have made contact. This visual guide will help you understand and develop a feeling for the proper angle. With enough practice, knife sharpening can be done freehanded through the feedback a knife gives when passing along a strop.

In this helpful video, learn the basics of stropping a knife. From methods of holding a strop to finding your blade’s apex.

Examples of How to Strop a Knife

There are multiple methods used in stropping a knife. The traditional method is placing the blade perpendicular to the strop and covering small areas with multiple passes. This method allows for sections of the blade to be targeted but can be more difficult for beginners to polish the blade evenly. The crescent method polishes the full edge of the blade at once.

The tip is placed on the strop, and the knife’s length is run along the edge in a single pass. Stropping with this method can provide a more even blade, but it may be difficult to address smaller sections. However, stropping a knife can be done in various ways, and the techniques can be used in tandem. For example, one may start with a crescent method and then focus on an area using a traditional style.

I have two cheap Japanese skiving knives that I purchased from amazon when first starting leather work. Initially, these knives were sharp, but after years of use, neither edge will skive leather properly. To ensure both knives were as equal as possible, I ran both blades along a stone wall 10 times. At this point, both of these knives would not even cut paper, a relatively even starting point.

To ensure the sharpening process was the same, I counted 15 passes on each side of the blade for both knives. This was done on a 500-grit whetstone, followed by a 1000-grit stone. Before I began stropping one knife, I wanted to ensure they were both similarly sharp. I put them through the paper test again. Both knives could cut through paper without an issue, but neither could make curves when doing so.

Regardless, these knives were sharp, and I would be happy to use them for my daily crafting. Nevertheless, I continued working on one of the knives to see if there was a noticeable difference. My stropping equipment is a large piece of vegetable tanned leather on a sturdy wooden board. I embedded the leather strop with green jewelers rouge, a fine grit polishing compound.

I tend to do more passes in my stropping process. I started with 20 passes on each blade side and finished with three single passes on each side. During the single passes, I flipped the knife over after every pass to ensure the final blade edge would be even. Testing the knife with paper again, I immediately felt and heard a difference.

The cutting process was smoother and quieter, two signs of a sharper knife. Trying to curve the blade in the paper was more successful but still presented some difficulties. Overall, stropping the blade made it sharper. Since these knives are leather working tools, I wanted to test how they would perform and hold up while doing what they were made for, skiving.

This leather was naturally very soft and stretchy. I taped it to my cutting surface to ensure both blades had the best chance. The blade that was only sharpened and not stropped was making little to no progress in skiving. Instead of going through the leather, it was stretching and taring. However, I found much fewer issues when trying the stropped knife.

Although the leather was still stretching as I tried to pass the blade through, the stropped knife was able to make a clean cut without tearing the thinner leather. The most interesting part about testing the blades was how quickly the blade that wasn’t stropped dulled. I spent 30 minutes with each blade, passing through various leather scraps to get a good feel for my results.

Afterward, I tried the paper test again. The blade that was only sharpened on stones had difficulty producing a clean cut through the paper. The stropped knife went through smoothly and could still cut curves in the paper. Stropping the knife seems to have made a noticeable difference in both the cutting edge and how long the edge stays at its peak performance.

At what angle do you strop a knife?

The angle for stropping depends on the angle the knife was sharpened. Keeping the same angle throughout the entire process is ideal. However, most knives tend to be sharpened around 20 degrees.

Can you strop a knife without compound?

Yes, the polishing compound is completely optional when stropping a knife. It is highly recommended, though, as it can improve your results.

Do you need to strop a knife?

No, a knife does not need to be stropped. Stropping is a finishing technique that can improve a knife’s edge but is ultimately optional. Similar results can be achieved using high grit whetstones.

Can you use a leather belt as a strop?

Yes, a leather belt can be used for stropping. It may be difficult as the leather is thinner than a strop, but a belt will work in a pinch.

Can you over-strop a knife?

Yes, a knife can be over-stropped. Once a knife has reached its most polished on a strop, additional passes can only worsen the edge. An overly long stropping session is prone to mistakes and contamination and can remove excess material from a knife.

A sharp knife is not only a safe knife but also an efficient one. Stropping your work knife can make all the difference in leathercraft, and is well worth the few minutes it takes.